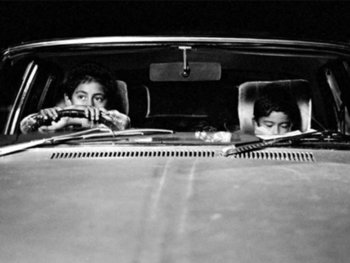 Two Cars, One Night is a 2004 short film (11 minutes) from New Zealand, directed by Taika Waititi.

Two Māori children, 9-year-old Romeo and his brother Ed, are sitting in a car outside a pub in Te Kaha, New Zealand. They have apparently been left there to sit while their "olds" (parents? older siblings?) drink and socialize inside the pub.

Another car pulls up in the parking lot. Left in that car is a feisty 12-year-old Māori girl named Polly. Romeo, unable to pull Ed's nose out of his book, starts yelling at Polly, but she gives as good as she gets.