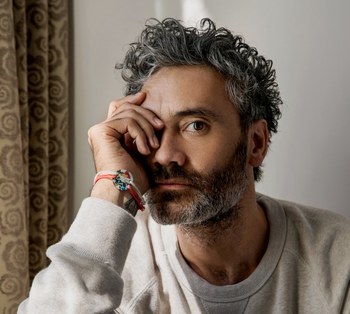 A vintage dickhead.
"I constantly remind myself that there are terrible movies out there. I try to watch them, some of them, to give myself an understanding of what not to do."
Advertisement:

Graduating from Victoria University in Wellington, he originally worked primarily as a comedian and actor, and was one half of the comedy duo The Humourbeasts with Jemaine Clement. He also acted in local low budget films and TV series and in 2011 played a supporting role in the superhero film Green Lantern (2011) before later turning his full focus to directing and writing.

As a director, he's best known for What We Do in the Shadows, Hunt for the Wilderpeople, Thor: Ragnarok, and Jojo Rabbit, all of which he appears in as an actor. He also wrote the initial screenplay of Moana.

In 2020, Jojo Rabbit won him his first Academy Award for Best Adapted Screenplay.