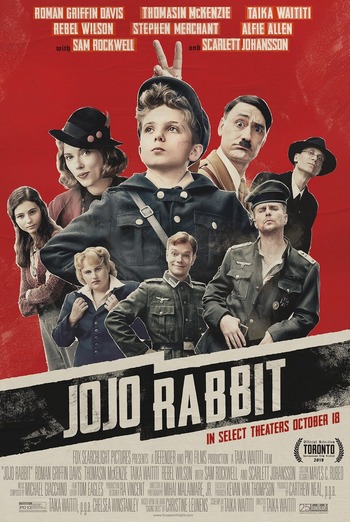 An anti-hate satire.
"It's definitely not a good time to be a Nazi."
— Yorki
Advertisement:

Jojo Rabbit is a 2019 American Black Comedy film written by, directed by, and starring Taika Waititi. It is loosely based on the book Caging Skies by Christine Leunens.

Jojo (first-time actor Roman Griffin Davis), a shy boy living in the Third Reich, wants to become a Nazi so he can fit in with his peers. Accompanying him is his Imaginary Friend Adolf, a caricature of Adolf Hitler (Waititi).

While Jojo struggles to blend in, his mother (Scarlett Johansson) rescues a Jewish girl named Elsa (Thomasin McKenzie) and hides her in their home. When Jojo meets Elsa, he begins to have second thoughts about being a Nazi.

Let everything happen to you
Beauty and terror
Just keep going
No feeling is final.
— Rainer Maria Rilke
Feedback

Rosie Betzler is protective of her son Jojo and isn't afraid to slap a Nazi officer around for his wellbeing.

Rosie Betzler is protective of her son Jojo and isn't afraid to slap a Nazi officer around for his wellbeing.