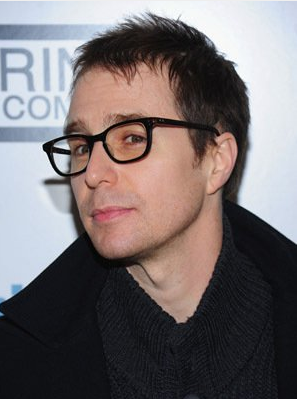 "I've played so many hicks and country bumpkins. It's hilarious because I've always lived in cities."
Advertisement:

Samuel Rockwell (born November 5, 1968 in Daly City, California) is an American actor. He is mostly known for his work in indie movies, and was once described by Roger Ebert as "the go-to guy for weird characters." He gained public attention with roles in Lawn Dogs, Galaxy Quest, and the first Charlie's Angels (2000) movie. He went on to play larger parts in Confessions of a Dangerous Mind, Moon, and Iron Man 2. He won an Academy Award for Best Supporting Actor for his role in Three Billboards Outside Ebbing, Missouri.

Also, his natural speaking voice is disturbingly similar to Owen Wilson's and the guy can DANCE.