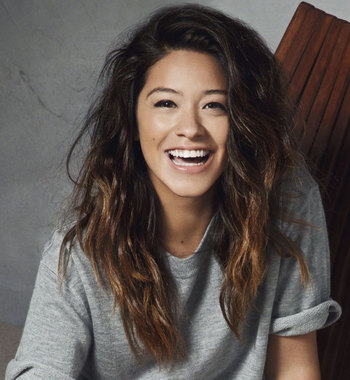 “To be seen and heard is a simple human need."
Advertisement:

First appearing on 2004's season of the original Law & Order, she's had a widespread career on television since. She's best known there for being the titular star of Jane the Virgin. Her role as the ambitious hotel worker Jane Gloriana Villanueva has won her awards such as a Golden Globe for "Best Actress – Television Series Musical or Comedy" and an Imagen Award for "Best Actress – Television".

In terms of feature films, she's appeared in movies such as 2012's Filly Brown and 2016's Deepwater Horizon among others.

As a singer, she was one of the many artists on the song "Almost Like Praying", written by Lin-Manuel Miranda, performing under the collective name 'Artists for Puerto Rico'. Released on October 6, 2017 by Atlantic Records, the track was created to support relief efforts in Puerto Rico in response to Hurricane Maria.

Some of the tropes associated with the actor's works: