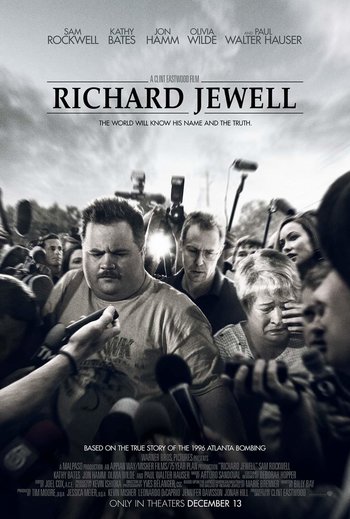 "There is a bomb in Centennial Park; you have thirty minutes."
"His accusers are two of the most powerful forces in the world. The United States Government, and the media."
— Watson Bryant
Advertisement:

Richard Jewell is a 2019 biographical drama directed by Clint Eastwood and written by Billy Ray.

It tells the true story of the 1996 Atlanta Olympic Bombings

discovered a bomb and alerted the authorities. Initially hailed as a hero, Jewell eventually became a suspect and subject to investigation from the media and the FBI, and finds himself having to fight back with the help of a friend who is an attorney.

The movie stars Paul Walter Hauser as the protagonist and titular character, along with Sam Rockwell, Kathy Bates, Olivia Wilde, and Jon Hamm. The movie was released on December 13, 2019 in the United States.

"They want to fry you. You ready to start fighting back?"