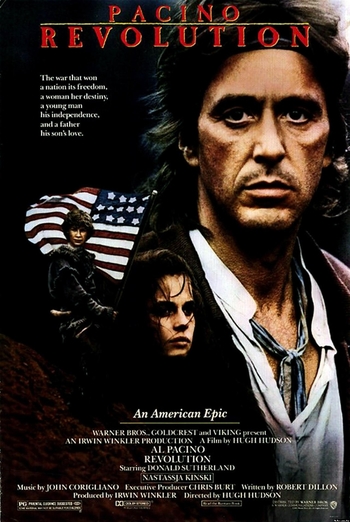 Revolution is a 1985 film directed by Hugh Hudson, produced by Irwin Winkler, and written by Robert Dillion.

Tom Dobb (Al Pacino) is a New York trapper who is just going about his business, even though said business results in his son and him homeless and without money or any possessions. However, his son Ned (Dexter Fletcher) decided to join up with the Continental Army in The American Revolution in exchange for five shillings and a promise of land once the war ends. Tom isn't too happy to hear about that and he joins up with the army so he can try to protect his son. Daisy McConnahay (Nastassja Kinski), a young aristocrat and rebel, joins up with them, and this causes considerable friction between her and her parents Mr. McConnahay (Dave King) and Mrs. McConnahay (Joan Plowright). However, things go wrong when the British drive the Continental Army out of New York City, prompting Tom and Ned to quit the army. Then they get worse when British Sergeant Major Peasy (Donald Sutherland) comes into the picture. Peasy needs more drummer boys, and Ned is just the perfect replacement. Now, Tom must rescue his son from the British.