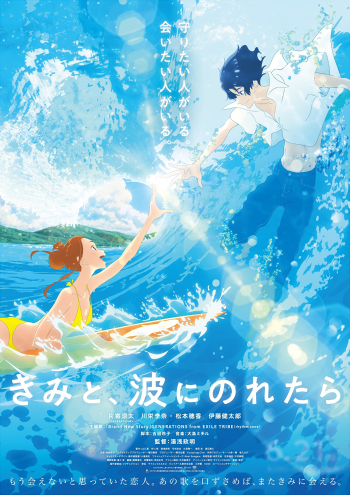 Ride Your Wave (きみと、波にのれたら Kimi to, Nami ni Noretara) is a 2019 animated film produced by Science SARU and directed by Masaaki Yuasa.
Advertisement:

It tells the story of Hinako Mukaimizu, a 19-year old girl with a passion for surfing who moves to an oceanside town in order to attend college. There she meets Minato Hinageshi, a 21-year-old firefighter who saves her when her new apartment catches fire. The two of them fall deeply in love, with plans to get married in the works. Unfortunately, that all changes one morning when Minato sacrifices his life to save a drowning boater and Hinako realizes that she can summon his ghost into nearby bodies of water through singing.