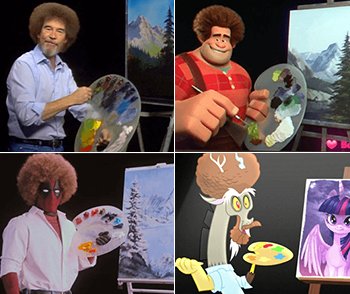 "And we'll add a happy cartoon...and a Heroic Comedic Sociopath...and a...well...he's painting a pretty pony. That's very nice."L - R, top to bottom Ross, Ralph, Deadpool, and Discord.
"Hello my happy little viewers, hello. As you recall last time, we did a happy little painting on the happy little Ghostbusters. You all seem to like this one and I don't blame you, its a wonderful piece. So today, we're going to do a happy little follow-up to this happy little picture, because you like it so much, you deserve to see it explored even more... except for the parents, you didn't care for the swearing and the smoking, so uh this one we're going to make it more family-friendly."
— The Nostalgia Critic (review

Much like Fred Rogers, Bob Ross of The Joy of Painting became famous through the medium of public television and quickly gained traction as an icon for his calm, wholesome Nice Guy personality, contagious optimism, and educational premise. People all over would use episodes on his television show both as art teacher and meditation tool. Having ascended to meme-status over the years, Bob Ross as an icon became popular and eventually codified various tropes found on this very website.

And with that said, popularity breeds imitation. His bohemian dress, perm haircut and the general visual aesthetic of his show is often parodied to death in happy little comic books, happy little movies, even other happy little television shows, all adopting his happy little tone and happy little catchphrases.

Sub-Trope of Fountain of Expies and Stock Parodies. Related to Funny Afro (the "character dons an afro wig for a quick gag" variant). Compare Artsy Beret, the other image of artists in media.

How to Draw with Tenacious D

Tenacious D does their own rendition of The Joys of Painting as promotional material for Post-Apocalypto.

How to Draw with Tenacious D

Tenacious D does their own rendition of The Joys of Painting as promotional material for Post-Apocalypto.