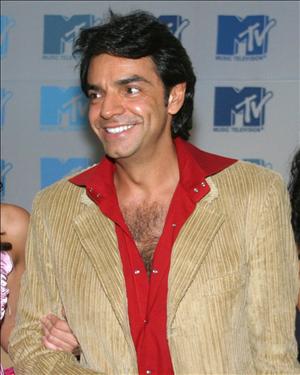 Eugenio González Derbez (born September 2, 1961 in Mexico City, Mexico) is a Mexican comedian who wrote, produced, and starred in a number of popular sketch comedies from the late '80s through the early 2000s. More recently, he's been the producer of two sitcoms, but only the star of one. He practices a style of comedy that walks an exceedingly thin line, with sophisticated and occasionally literary humor on one side, and crass immaturity and scatology on the other. Additionally, he has an infatuation with puns that rivals that of Jasper Fforde; the names of many of his characters, sketches, and the titles of his shows very often make use of some sort of phonetic wordplay. For example, his sketch show Derbez en cuando is a pun on the Spanish phrase "de vez en cuando," or "every once in a while" for English-speakers.

In 2013, he made a successful directorial debut with the film No se aceptan devoluciones (known as Instructions Not Included outside of Mexico).

Three of his children (Aislinn, Vadhir, and Jose Eduardo Derbez), as well as his ex-wife Gabriela Michel, are actors in their own right.

(Cultural tidbit: titles are not capitalized in the Spanish language)

Tropes frequently used in his work: