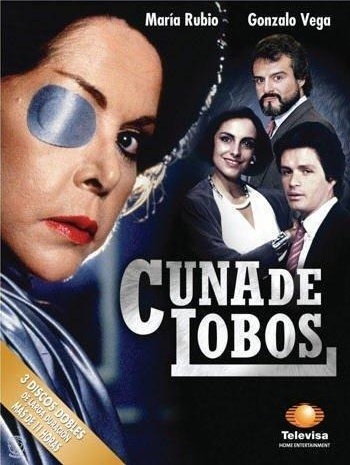 Literally "Den of Wolves", Cuna de lobos is a popular Mexican telenovela that ran from 1986 to 1987. It starred María Rubio as ruthless matriarch Catalina Creel, along with Gonzalo Vega and Diana Bracho as the main couple.

The Larios family is the head of giant pharmaceutical company Lar-Creel. In order to insure that her son inherits the family fortune, matriarch Catalina Creel fakes an accident involving her stepson to manipulate him. One day, however, her husband Carlos tells her that he knows she is faking her blindness and is going to write her out of the will and reveal her secret. She poisons and kills him before he is able to alter the will. After a quick funeral without an autopsy, it is revealed that no one can inherit his fortune until they have a son first. Catalina's son Alejandro is married, but his wife is infertile, while stepson José Carlos is a bachelor. Catalina commits several crimes to insure that her son will receive the inheritance.

In the tradition of popular telenovelas, it has been remade a few times to varying success and has been endlessly parodied. Televisa remade the novela as a limited miniseries in 2019 starring Spanish actress Paz Vega as the role of Catalina Creel.