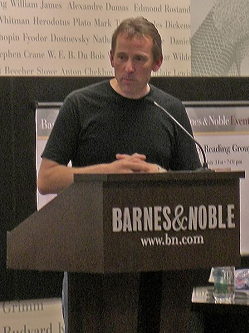 Jasper Fforde (born 11 January 1961) is a British science-fiction, fantasy, and detective mystery novelist, oftentimes all three at once.

He's the mind behind such offbeat series as Thursday Next, Nursery Crime, and Shades of Grey, and famous for his humorous style, both silly and highly intellectual, playing quite liberally with meta-fictional concepts (And for the puns. Tons and tons of puns).

Fforde is an aviation buff and enjoys flying, and before publishing his first book, The Eyre Affair, in 2001, he worked as a cameraman on such Hollywood productions as GoldenEye, Quills, and Entrapment.

In 2010, Fforde published his first offering for young adults with The Last Dragonslayer.

The Thursday Next Series:

The Shades of Grey Series: