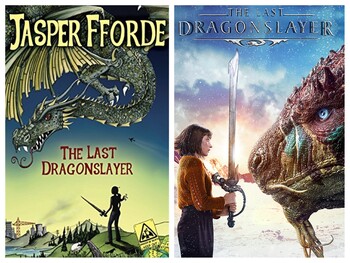 The Last Dragonslayer (marketed as "The Chronicles of Kazam" in the US) is an Urban Fantasy young adult series by Jasper Fforde, following the adventures of the teenage Jennifer Strange as she navigates a world where modern technology and traditional magic live side by side in the UnUnited Kingdom.

Protagonist Jennifer Strange is a fifteen year-old orphan, indentured servant, and acting manager of Kazam: an employment agency for soothsayers and sorcerers struggling to make a living in a world where the magic is gradually ebbing away. Jennifer has no magic herself, but she makes do shepherding her batty wizidrical colleagues through the challenges of everyday life with a combination of tenacity, street-smarts, and an unflagging moral core. She would consider her life pretty normal, at least until a prophecy concerning the death of the last living dragon in the UnUnited Kingdom upends her world and sets her on a path towards confronting the powers that be. Jennifer will have to use every ounce of her courage and grit to save not only herself, but also her friends at Kazam, the Kingdom of Hereford, the UnUnited Kingdom, and the very magic that underpins her world.

where extra information on all four books and the world of The Last Dragonslayer can be found. It includes a helpful map, a list of characters (last updated with the 2nd book's publishing), and a combination glossary/ bestiary that's worth a gander.

The first novel was adapted for television by Sky1 and broadcast on Christmas Day 2016.

The Last Dragonslayer Contains Examples Of: