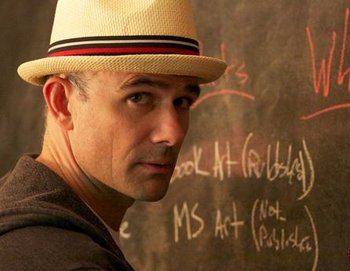 "We all create stories to protect ourselves."
Advertisement:

Mark Z. Danielewski (born March 5, 1966) is an American author best known for House of Leaves. His works all employ unique and unconventional styles in terms of the formatting of the text itself, and also are somewhat infamous for being very confusing a good portion of the time.

His works so far include:

Poe is his sister, and their works are somewhat connected.