They Walk Among Us 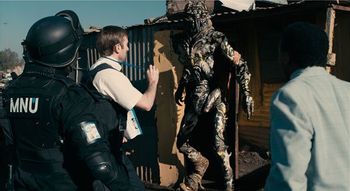 That's the main gist of this trope: in an otherwise normal world not too different from our own, humans share the world with something distinctly nonhuman, or at least abnormal or fantastic; another sentient species, or a different kind of being altogether. Their presence in the world is not regarded differently in any way from how we look at all the different races and ethnic groups here. Needless to say, Fantastic Racism tends to ensue, but though this is a common staple, it's not a necessity.

Fantasy beings Walking Among Us is often a component of a Magic Realism setting. For beings who Walk Among Us without our knowledge, see The Masquerade.

Not to be confused with Among Us.