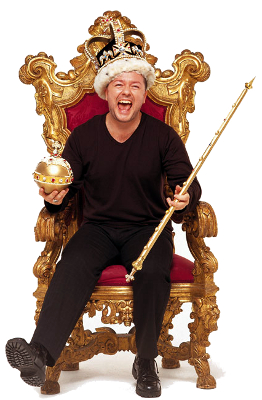 Ricky first appeared in the public limelight in 1983 where he, and university friend, Bill Macrae formed Seona Dancing.

Soon after, Ricky joined the radio presenter ranks of the unlicenced radio station XFM doing daily night-time sessions. This was a lot of effort and he decided to get an assistant. He hired the first person to turn up after he agreed to do "all the boring stuff". That person was Stephen Merchant, who has since ending up co-writing with Ricky on multiple projects. After Capital Radio took over XFM and made Gervais redundant, he ended up working on several projects for the BBC on both the radio and TV.

He then appeared a lot on Channel 4 including; Golden Years, The 11 O'Clock Show and Meet Ricky Gervais. In 2001 the popular series The Office appeared on the BBC, starring Gervais and co-written by Gervais and Merchant. Following the success and popularity of this hit series, Ricky started the first of his stand-up comedy tours, along with writing his first book Flanimals.

After this point it seems hard to keep track of all his projects, which include Extras (also co-written with Stephen Merchant), the podcast The Ricky Gervais Show with Stephen and their long-suffering former XFM producer Karl Pilkington, two more stand-up tours with new material, co-writing/directing and starring in several movies, voice-acting, and making countless cameos and interviews. He starred as the (human) lead role in 2014's Muppets Most Wanted.