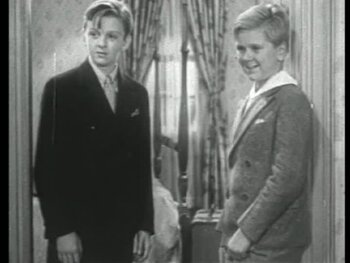 Peck's Bad Boy is a 1934 American drama film directed by Edward F. Cline. It was based on the series of books by George W. Peck. In particular the story, "Peck's Bad Boy and his Pa" from 1883.

The movie is about Bill Peck, a 10 year old boy with a very strong relationship with his father. His mother has passed away, so his aunt Lily and her son Horace move in to help raise Bill.

Horace and Lily mistreat Bill because he is adopted and they do not consider him family. Horace frames Bill for various misdeeds while Lily isolates Bill by firing the maid and groundskeeper, both of whom Bill was close to.

Bill's life soon becomes a living hell, as Horace begins to steal his possessions and his father away from him, all while bullying him for being adopted.

Henry finally figures out what's been going on when Horace gives Bill a bloody nose, and kicks Lily and Horace out.