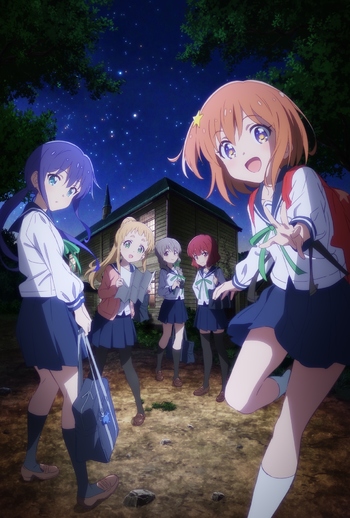 From left to right: Ao, Mai, Mari, Mikage and Mira
Mira Konohata: How cool! I never knew I share a name with a star! What about you, Ao? Is there a star with your name?
Ao Manaka: No way, my name is too weird for that...
Mira: I don't think it's weird, I think it's cool! Besides, you can just name one after yourself?
Ao: Name one? Nah, maybe an asteroid... if I discover an asteroid, I get to name it...
Advertisement:
Mira: Let's find one together, then! Let's do it! Find an asteroid!

When she was camping as a child, Mira Konohata meets Ao Manaka, who points out the existence of a star in the sky named after her. However, Mira becomes saddened to learn that there are no stars named Ao. The two would promise to explore the heavens and eventually get a star named after Ao. Years later, Mira enrolls at Hoshizaki High School and decides to join the astronomy club to fulfill her promise. A dwindling member count, however, causes the astronomy club to be merged with the Earth Sciences Club. While disappointed, Mira decides to join the Earth Sciences Club anyways and finds herself reunited with Ao.

Asteroid in Love (恋する小惑星, Koisuru Asteroid) is a Yonkoma manga by Quro which began serialization in Manga Time Kirara Carat in 2017. An anime adaptation began airing in January 2020: it is produced by Dogakobo and is available on Crunchyroll for viewing as well as a dub release by Funimation.

Asteroid in Love provides examples of: