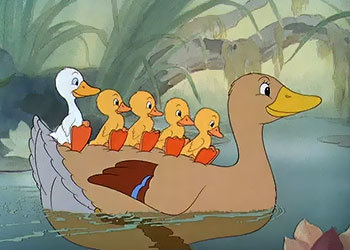 "Duck, duck, duck, duck... GOOSE!"note Well, swan, actually, but you get the point.
"He'd heard about children being reared by wolves. He wondered whether the leader of the pack ever had to sort out something tricky like this. Perhaps he'd have to take him into a quiet clearing somewhere and say, Look, son, you might have wondered why you're not as hairy as everyone else..."
— Guards! Guards! on interspecies adoption (a human adopted by dwarfs)
Advertisement:

Baby is orphaned. Loving parents find baby. Parents raise baby as their own. This is a standard set-up in stories. But sometimes, as the baby grows up, they find out that they're a little... different from the rest of their family. Really different. Sometimes they notice this, and start angsting.

And sometimes, they don't notice anything at all and are perfectly content with living their lives with their families, no matter how obvious it is that said family isn't their "real" family. This is taken to extreme measures in Funny Animal cartoons, where the species is very different but the adoptee doesn't notice.

Usually played for laughs rather than straight these days, due to the dying out of the Changeling myth and parents these days avoiding keeping adoption a secret from their kids. For the "humans raised by animals" version, see Raised by Wolves. See also No Social Skills, the inevitable behavioral problems that come with such an adoption, and Happily Adopted, which is what they tend to be. Compare/contrast Chocolate Baby, which generally involves something other than adoption. Compare Red-Headed Stepchild.

Dog finds out a shocking secret.

Dog finds out a shocking secret.