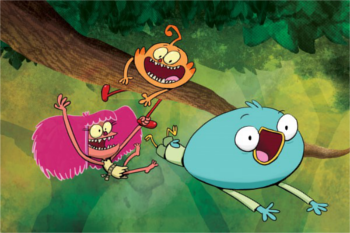 The bestest friends ever.
Advertisement:

Harvey Beaks (formerly known as Bad Seeds) is an animated series on Nickelodeon created by C.H. Greenblatt, the creator of Chowder and former storyboard artist/writer for SpongeBob SquarePants. It ran from 2015 to 2017.

The series focuses on the eponymous Harvey Beaks, a sweet, well-meaning bird, who's best friends with two rambunctious wild children named Fee and Foo. While their companionship might seem odd, the trio's bond grows ever stronger as Harvey learns to step outside of his comfort zone and take big chances, resulting in many misadventures in the magical forest of Littlebark Grove that they call home.

The series premiered on March 28th, 2015 and was confirmed to be renewed for a second season on June 21st, 2015, which started airing on June 13th, 2016 with the episode The New Bugaboo, in which Harvey's baby sister finally hatches from her egg. However, it has also been announced that it will also be the final season of the show

, with the series moving to Nicktoons in 2017. Nevertheless, the show has proven to be much beloved by viewers and critics alike, earning itself nominations at the Emmy and Annie Awards, as well as a decent-sized fanbase who find its simple and charming stories to be highly endearing.

The last episode of the series aired on December 29th, 2017.

On June 21, 2018, the entire series is now available for streaming on Hulu!