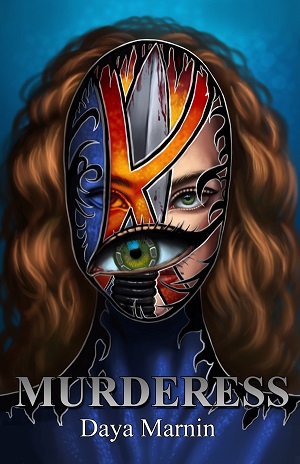 "...And listen: now they know who you are. They think you're here and will look for you obsessively, so it is dangerous for you to come back here. You must be careful, because you mustn’t be caught. And there is something of utmost importance you must know: the war will exterminate everyone. You might be the only one able to stop it. When you come back here again, go north straight away, to the Refugee Camp. Do not delay, and most importantly: let no-one know who you are."
Advertisement:

Murderess (רוֹצַחַת, rotsakhat) is a 2014 fantasy novel by Israeli writer Daya Marnin. It is the first in the six part The Exiles of Greywall’d Saga. Marnin began writing it from the ages of 13 to 15 and is currently working on the next book in the series, Priestess.

Lu Killer is a teenage orphan girl from England, who’s been transferred from one boarding school to the next throughout her life, having learned to care little for anything or anyone. One day, when travelling to the next boarding school, James Centre Boarding School, a young boy comes into her cabin and gives her some cryptic instructions, then walks out. She doesn’t think much of it, but then she notices after he’s gone that he knew her name without her ever telling him what it was, but he’s long gone somehow, leaving only his blood-soaked hat for Lu to find.

Once she’s arrived at her boarding school, Lu feels strangely compelled to befriend a group of Essex girls, despite her deep contempt for them. She quickly discovers the group leader, Bridget, is holding the girls in line by bullying them using magic, and, more importantly, she has some formidable magic powers herself that she needs to learn how to control, and fast, once she encounters a few people who, strangely enough, call her a murderess and try to kill her.

As it turns out, to her horror, she hails from a lineage with the questionable reputation of being horribly, murderously violent. Not only this, but when she meets the boy again, she finds out she has a crucial mission to save the magical world of her ancestors, Greywall’d, and possibly even this one…

Good luck, Troper, and may fortune prove your ally.