Animation / Leafie, a Hen into the Wild 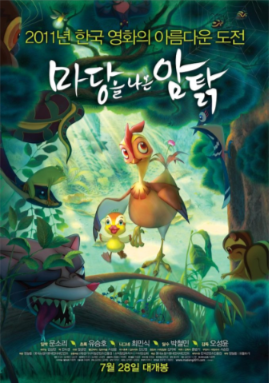 It's a tough world, for a hen.
Advertisement:

An animated film from South Korea, released in 2011. It tells the story of a battery hen named Leafie, who manages to escape the cage where she has spent all her life and make it into the wild. Through series of events, she comes across a duck egg, whose mother had been killed by a weasel. Having never sat on any of her eggs back on the farm, she does so eagerly, to (surprisingly) no protest from the egg's father. She promises the father duck, whom Leafie names Wanderer, to take the duckling to the everglade when he hatches. After the duckling does hatch, he and Leafie embark on their journey there, and the story proper begins.

One of the best-looking and highest grossing animated films from S. Korea (watched by 2.2 million).

This entry is heavily spoilered. You have been warned.

The movie ends with Leafie allowing herself to be killed by One-Eye the weasel, so she can feed her babies, having lived a happy life raising Greenie.

The movie ends with Leafie allowing herself to be killed by One-Eye the weasel, so she can feed her babies, having lived a happy life raising Greenie.