Literature / The Horse and His Boy 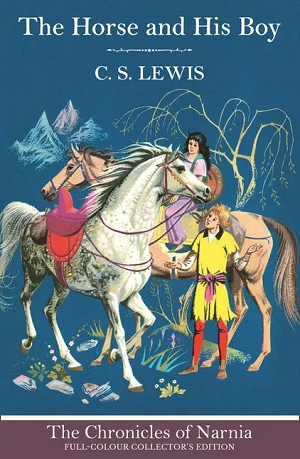 The fifth book written for The Chronicles of Narnia series and the third book chronologically; a midquel that takes place during the reign of the Pevensies in The Lion, the Witch, and the Wardrobe. The Horse and His Boy is the only book in the series where no action takes place in our world. It tells the story of four runaways from the southern kingdom Calormen — the peasant boy Shasta, the Rebellious Princess Aravis, and two Narnian horses Bree and Hwin — whose quest for their own freedom soon turns into a mission to warn Narnia and Archenland of an impending invasion by the Calormene prince Rabadash. The journey will take them through the great city of Tashbaan, across the treacherous desert that borders Calormen, and over the mountains that separate Archenland from their ultimate goal — Narnia and the North!
Advertisement:

Unlike other books in the Narnia series, this one is not mythic in scope (until the ending, where certain epic deeds are done and The Reveal is... revealed.) Royalty is mentioned only in passing until the finale, there are barely any religious or magical elements, and the protagonists don't have a ready-made court of willing, loyal Narnians ready to help them through any troubles they have. The novel makes it clear that our heroes are alone in a largely hostile world, and that no one will respect them until they've earned respect. The plot focuses mainly on the four's long, long journey to Narnia, the sights they see and things they learn, and the Character Development everyone goes through in doing so.