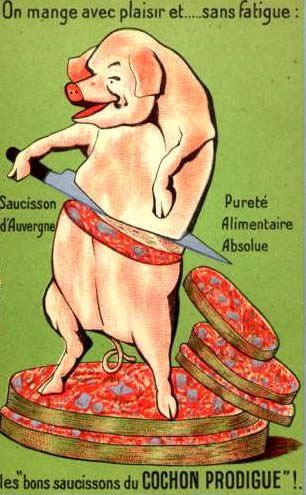 C'est très effrayant, n'est-ce pas?translation Very scary, isn't it?note The picture is from a 1919 ad postcard for “Le Cochon Prodigue”, a brand of Auvergne sausage. Top: "We eat with pleasure and ... without fatigue." Left: "Auvergne sausage". Right: "Absolute food purity". Bottom: "the 'good sausages of Cochon Prodigue (prodigal pig)'!"
Does the sign include an illustration or mascot? Drawings of plates of food or ribs are okay, though not great. Pig mascots are good; smiling anthropomorphic pigs are even better. Is the pig surrounded by flames? If so, it should look happy about the situation. Best of all is an anthropomorphic pig eating ribs. Such a sign says, "Our food is so good that pigs will commit cannibalism to enjoy it."
— Stephen Granade, Choosing a Barbeque Restaurant

There is a curious phenomenon in commercials in which edible animals or the post-prepared food and drink is given intelligence and the power of speech. And it wants humans to eat it. Or at least, others of its kind.

The title comes from the Dish of the Day sequence in Douglas Adams' The Restaurant at the End of the Universe. At the Restaurant, Arthur Dent is horrified to discover that the Dish of the Day is a talking cow. The Dish calmly explains that the restaurant is cruelty-free because all the potential entrees want to be eaten and can say so. Ironically, several science-fiction works written since have played this idea straight, often crossed with I'm a Humanitarian for maximum Nightmare Fuel.

There is, naturally, a great deal of cross-over with Carnivore Confusion. May also overlap with Fridge Horror, and more often than not with Cargo Envy. Can be horrifying, sick or somewhat funny depending on the person. Can sometimes be justified by using fruit, which quite logically should want to be eaten so that the seeds will be spread.

Comes in a few variations:

Compare Black Comedy Cannibalism, Meat-O-Vision, and Stewed Alive. Contrast You Won't Like How I Taste where the edible person doesn't want to be eaten. Contains aspects of Tools of Sapience.

If the animal starts having second thoughts, does that mean it's having a Meal Realization?

An animal or food product is advertising itself as food. Shown in the page image.

An animal or food product is shown eating others of its own kind, and advertising them as food.

A variation of this trope, where some other animal or food is trying to get you to eat the food advertised, presumably so you don't eat it.

I Want to Live!

An animal or food doesn't want to be eaten, and is running from you, its predator. Usually played for Black Comedy.

Why Don't You Want Me?

An inferior food product wants to be eaten, but can't, because it's not as good as the product being advertised.

Parodies and Other Variations

When Tina tells her story to Gene, she mentions the fruits in her story wants to be eaten.

When Tina tells her story to Gene, she mentions the fruits in her story wants to be eaten.