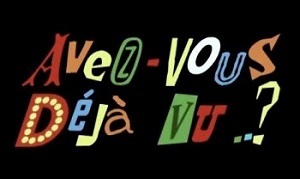 Avez-vous déjà vu... ? (Have you ever seen...?) is a weird French animated series. Each episode lasts one minute or less, and presents something that you have probably never seen. Like spitting houses. Or a Space soap opera. Or a serial-killer egg.

150 episodes were released, starting in 2006, each around 45 seconds long. The narrator of the series' original version is Alain Chabat, who is a master of French nonsensical humor.

HAVE YOU EVER SEEN... A list of tropes appearing in Avez-vous déjà vu... ?

Maintenant, oui.note Now, you have.