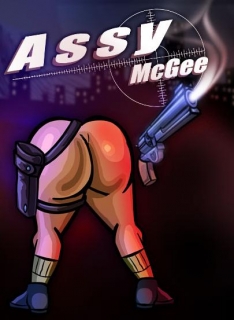 Because you wouldn't believe it otherwise.
Assy McGee is an animated Adult Swim show, started in 2006. The title character is a mushmouthed torso-less Rabid Cop. By "torso-less", we mean he is a walking pair of buttocks, one walking around "backwards". Assy and his cop partner, Sanchez are cops in the city of Exeter. No matter the crime, Assy usually resolves it by getting drunk, shooting wildly and somehow stopping the perp (usually lethally). You may be wondering how a walking pair of buttocks gets drunk or talks. It's exactly what'd you would expect.
Advertisement:

Canceled due to poor ratings and negative viewer reactions. The whole first season was made before the cancellation, so the rest of the episodes were "burned off" on Sundays, late at night.

No relation to Haryadhi Gee.