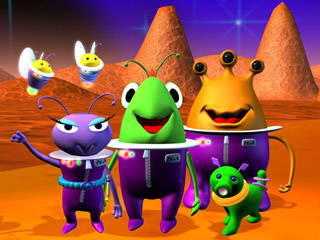 "Way, way out, where the planets do the hula,
Spin and shout, till you find yourself on Zula!
Let's take off!
We're all ready to roll!
It's fun to learn with the Zula Patrol!"
—- The theme tune
Advertisement:

3D/CG animated television series aimed at preschoolers to 2nd Graders that started airing on PBS Kids in 2005 and now runs on Qubo. Created by Deb Manchester in 1999, Zula Patrol was originally a children's book. This series was designed to entertain while promoting an understanding of science and astronomy through engaging character-driven stories, which focus on specific educational science learning objectives. In every episode of The Zula Patrol, the characters demonstrate inquiry-based learning and critical thinking skills. They also model inquisitiveness, observation, self-reflection, and social experiences that encourage collaboration, teamwork, and an excitement for scientific exploration and problem solving.

Despite its target audience, the show has a small Periphery Demographic, but you won't hear a lot of people talking about it, since the show's somewhat obscure.

Of course, in every new episode, they do learn something new and science-y. However, the show breaks the laws of science about once per new idea they teach.