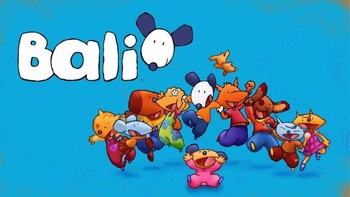 A French-Canadian animated children's Slice of Life series based on a series of French children's books by Magdalena Richard and Laurent Richard. It was produced by the company Planet Nemo in association with Canadian channels CBC and TVOntario and French channels France 5 and RTBF.

The eponymous character, Bali, is a Funny Animal dog who lives with his mother and father, his baby sister Lea, and his favorite stuffed animal, Kikou.

The show aired in the United States on PBS Kids, albeit only on certain PBS affiliates, but made its world debut in Canada on TVOKids. As of 2019, all three seasons are available on Amazon Prime.

Has nothing to do with the Indonesian island and province named Bali.