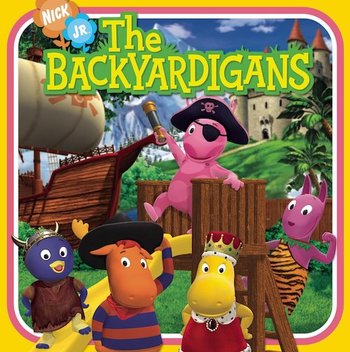 Your backyard friends.note On top: Uniqua. Bottom row from left: Pablo, Tyrone, Tasha, and Austin.
"We've got the whole wide world in our yard to explore..."
— Opening theme
Advertisement:

A CGI-animated series created by Nickelodeon's Janice Burgess and broadcast worldwide, mostly on Nick Jr. and its parent network. Written and recorded at Nickelodeon Animation Studio in the USA, the animation was done by Nelvana in Canada. The series was based on a live-action pilot from 1998 titled "Me and My Friends." It premiered in 2004 and ran for four seasons, the last of which finished airing in 2013.

The cast are all young Funny Animal friends: Uniqua the "uniqua" (a one-of-a-kind species), Pablo the penguin, Tyrone the moose, Tasha the hippo, and Austin the kangaroo. All five live in what appears to be a suburban neighborhood with a large common backyard area.

We open on one or more of the characters in the backyard playing "pretend", setting up the scenario for the viewer in a song and dance which exemplifies the episode's musical genre. Then things segue into a sort of holodeck-style fantasy — whether in the kids' imaginations or literally isn't quite clear — in which the backyard is transformed into the setting of the story and the characters dressed in appropriate costumes. From here the quest is treated entirely as if it were real...albeit clearly based on a child's logic...and frequently interrupted by musical asides.

Most episodes feature typical fantasy scenarios — cowboys, superheroes, pirates, explorers — but some are more sophisticated, and in later seasons especially several are full-on parodies of adult action-adventure: James Bond, Star Trek, Indiana Jones, Ghostbusters, etc. Further blurring the line between reality and imagination, the setting they create doesn't always stay within their control. Characters who weren't seen initiating the fantasy frequently show up within it, occasionally operating completely unbeknownst to the others, and the different plotlines collide in unexpected ways. The only consistent requirement is that a story contain no more than five humanoid characters, since no other speaking parts appear (excepting pets and a couple one-offs in specials).

There seem to be no space or time limits while the fantasy is in progress, but in reality it never lasts longer than an afternoon, since it's always dispelled by somebody's tummy conveniently rumbling just after the adventure ends. They race home for snacks, the story setting disappearing behind them as they go. The only indication that anything out of the ordinary just happened is Tyrone's comment: "That was an excellent _________ adventure, don't you think?"

Notable for its heavy use of original music (overseen by Lounge Lizards founder Evan Lurie), in a different genre — and usually not the one you're expecting — in each episode. The photorealistic dance moves that have likewise become a series trademark are originated by live-action dancers performing as each character to that show's music; according to the creators, this process also gives the characters much of their individual personalities.

Every episode is up on YouTube, courtesy of Nelvana's Treehouse Direct channel. Check them out here!

Thanks to its genre-hopping nature, this show tends to run through a lot of standard tropes, often in a single episode:

open/close all folders
A-C
D-F
G and H
I to L
M to O
P to R
S
T
U and V
W to Z
"We've got the whole wide world in our yard to explore.
Now it's time for us to have a snack.
Meet you next time when we're back!
With your friends, The Backyardigans..."
Feedback

Oh, come on, the rubber duck thing is just petty.

Oh, come on, the rubber duck thing is just petty.