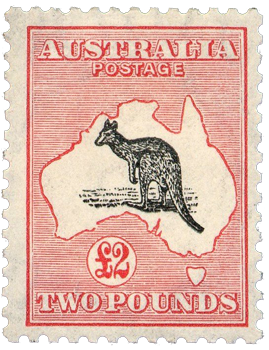 Ah yes, the kangaroo. Perhaps one of the silliest looking animals around: It hops around on two huge feet, it has a thick tail and, of course, it has a pouch. Because of their almost cartoonish nature, kangaroos are certainly ubiquitous in fiction. Sort of another animalistic Rule of Cool, if you will. Maybe it's just that exotic feel that Australia gives — after all, this is the country that's also home to the trope-worthy platypus. If the work is set in Australia, this is commonly a way to say "Hey! We're in Australia, mate!"

If it's a male, expect him to be named "Joey", have a comically exaggerated Aussie accent and possibly have a pouch (even though, in reality, only the females have pouches). It may also be depicted boxing, carrying someone in its pouch, maybe sporting an Australian Army slouch hat with one brim pinned up, or just plain jumping really high.

Occasionally, a wallaby may be used instead. Think of them as fun-size kangaroos.

Be warned: kangaroos have very sharp claws on their huge feet, and will use them on you if you get too close. Although it is rare, they are capable of killing a human being (just like pretty much everything else in Australia