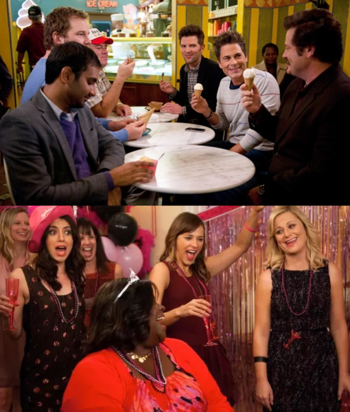 Whenever you have a mixed gender group of friends, often there will be episodes where the women get their own adventure together without any of the men along. And similarly for the men. Because even though you are all good friends, sometimes you just need some Girl Time.

This is particularly common with a ¡Three Amigos! setup (two girls one guy/two guys one girl), and how the odd man out either feels lonely, or more commonly gets a side adventure with a minor cast member.

This makes sense in some cases. Would you want your guy friend there while you shop for lingerie, or would it really make sense having your female friend there trying out for the football team with you?

This Trope is similar to Girls' Night Out Episode, with some expansions:

Common setups for this include the Macho Disaster Expedition, A Day in Her Apron and a Girls vs. Boys Plot. See Two Lines, No Waiting for other kinds of A- and B-plots.