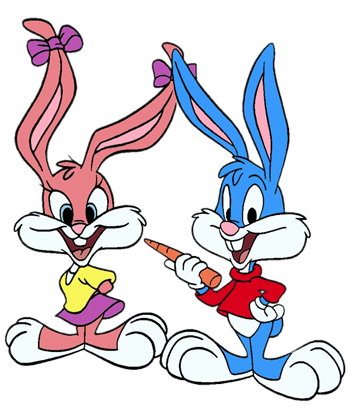 Women not wearing pants (or skirts) would be a little looney.
"You know a character is female in Sonic if they use clothing. Males have nothing to hide, literally."
— Nerf NOW!!, in The Rant for "Gotta Go Naked

It's very easy to see where this trope comes from; we are used to men having less of their bodies to hide, and we expect women to cover up more in comparison. Thus, its presence in a work is often a deliberate attempt to better distinguish both sexes by emulating our own gendered standards of modesty note  Hence why "naked" male characters who are portrayed posing as the opposite sex will always conform to this design scheme; if Bugs Bunny only wore a pink bow on his head for his iconic crossdressing shenanigans, the act simply wouldn't be as convincing to the audience than if he put on a full dress instead, or it may be simply a projection of said standards, with the artist feeling more comfortable with having female characters dress "appropriately" even when there is No Nudity Taboo in the work's setting. It may also be a reflection of society's expectations of men as being the wilder and more "savage" sex — hence the male characters' lack of clothing — and women as being the more civilized and "refined" sex — hence the greater amount of clothing in the female characters' designs. In general, the trope serves to bring a greater sense of familiarity to such fantastic settings, while still allowing the work to claim that the characters are not human and thus do not share our ideas of decency (or indecency).

This also applies to audience reactions towards the work in question; seeing a male Funny Animal appearing pantsless or clothesless alongside a fully-dressed female counterpart (or even other fully-dressed males) usually isn't at all weird to us, because we tend to interpret it as being analogous to a man walking around shirtless. But it can be jarring to see a female Funny Animal shown "naked" in a work where full outfits are the norm for gals, and especially alongside a male counterpart who is more clothed in comparison.

Most of the time, however, the trope serves to address the potential issues of featuring Humanoid Female Animals in a work where accessory-wearing or half-dressed characters are common, and these two tropes indeed go hand-in-hand for obvious reasons. Males are often portrayed as humanized animals, with less anthropomorphized designs and a general lack of explicit Secondary Sexual Characteristics which allow for looser standards of clothing; meanwhile, females tend to be depicted as animalized humans, being given physical traits such as womanly figures and breasts (or at least the vague suggestion of breasts). In this case, it would be more problematic and risqué for a sufficiently curvy female character to not be depicted as a Fully Dressed Cartoon Animal, and even the lack of explicit attributes may not be enough to excuse this in the eyes of the audience or the Media Watchdogs. note  Our reactions are also codified to a certain extent by expectations of a female character wearing something that covers at the very least her bottom half where breasts aren't a concern, due to silent through golden age animation setting that bar through a certain pair of mice.

In any case, expect this trope to be treated as an unspoken rule from a Doylist standpoint. Due to the Law of Conservation of Detail, exactly why female characters are exempt from the tropes that commonly justify the male characters' "nudity" In-Universe — such as Fur Is Clothing — is usually left unexplained outside of Fan Wank. Don't expect any explanation for the guys' blatant lack of modesty compared to the gals, either. If the trope ever gets lampshaded in a work, it's usually but not always the latter scenario that gets poked fun at.