Webcomic / Of Mice and Mayhem 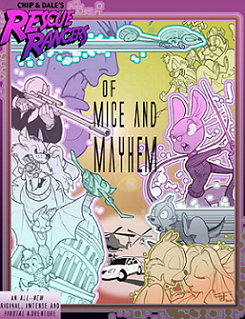 From 1989 to 1993, Chip 'n Dale: Rescue Rangers aired on American free TV. Also in the 90s, several more or less official comics were released for young readers (and, unbeknownst to the House of Mouse, the growing ranks of dedicated fans). In January 2003, however, one guy from New York City outdid it all single-handedly when he published a fan work he had created over the course of three years: Of Mice and Mayhem.

It is a Web Comic, or rather a Web Graphic Novel: It follows a Comic Book page layout and, unlike the serial format of most web fiction, the entire story—all 232 pages, including a front and back cover—was published at once.

Instead of throwing the show's concept over and making up something entirely new, Of Mice and Mayhem picks up where the show left off, and that is presumably after the episode "Good Times, Bat Times". Three of the most popular one-shot characters have joined the Rescue Rangers (giving at least two of them an extra popularity boost), and this extra personnel, together with their individual abilities, is direly needed on the case the Rangers are thrown into, a case that doesn't only go beyond anything ever seen in official material, but also takes several months to solve. Since the target audience isn't the same as the show's at that time—the first generation of fans who had all grown up by then rather than the kids who watched CDRR on Toon Disney—the author could increase the overall intensity by multiple notches.

While some accuse it of being a bad excuse for blatant Shipping promotion, most fans regard Of Mice and Mayhem as one of the greatest creations ever done by a Rescue Rangers fan and "up there" together with Mike Demcio's Fan Fiction epic Rhyme and Reason. It is often considered superior to the show as well as the official comics, both story-wise and artwork-wise, and it received fandom awards by the dozen.

). Prepare for a sleepless night or two after taking it in. note Sadly, the artist's original site, http://www.electricfishmusic.com/001.html

, appears to be down permanently. A colorized (albeit edited-down) version has been posted on DeviantArt

and can be found here

Fans will be delighted to know that the author is planning a sequel, but it won't be finished for some time.

Of Tropes and Mayhem: