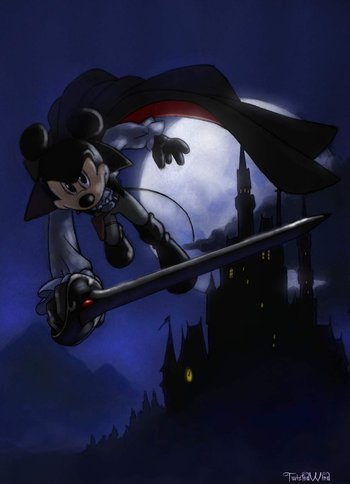 . It is also based on the noval Dracula by Bram Stoker,

In this Gothic-inspired universe, Mickey Mouse is reworked as a vampire called Count Michelu "Mickey" Dragul. Mickey is feared throughout his country and is the last scion of a long line of bloodthirsty vampires. But he is different. He is nice, and has been struggling his whole life, in the loneliness of his castle, with his dark urges. When traveler Mina Murray (this series' version of Minnie Mouse), the adopted daughter of merchant Scrooge McDuck, finds herself alone in the middle of his lands, he saves her from local bandits and invites her to stay in his castle. McDuck, terrified that his daughter has fallen prey to the "monstrous hellspawn", sends vampire hunter Oswald Abraham Van Helsing (Oswald the Lucky Rabbit) in Transylvania to look for her.

Also appearing throughout the series are other characters from various dark-inclined Disney properties, such as Peg-Leg Pete (now a cyborg), the Mad Doctor (a vicious vampire hunter who slaughtered Mickey's family), various ghosts from the Haunted Mansion (who now reside in Count Mickey's castle), Chernabog and Maleficent.

As of 2016, the three main story arcs are The Count Mickey Dragul

. For a while, twisted-wind issued concept art for what would allegedly be the next story arc, featuring grimdark reimaginings of characters from Disney's The Hunchback of Notre Dame and Pinocchio, but it was eventually cancelled; more recently, she put up the few first pages of The Count and the Maiden

, a midquel of the first story detailing what happened between the day Mina and Mickey first met and Oswald Van Helsing's arrival. There are also several Recursive Fanfiction, unfortunately written in Italian.

The Count Mickey Dragul series provides examples of (beware, spoilers will be unmarked):