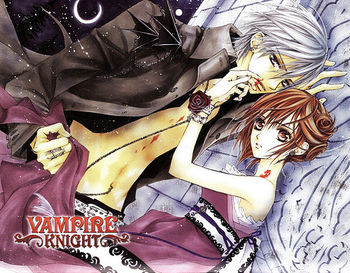 "Creatures of the Night, begone in the name of the Light! Unless you're one of the hot ones I can save, of course!"
— Princess of Mirrors, Princess: The Hopeful
Advertisement:

Because all girls want bad boys, and you don't get much badder than a blood-sucking monster. Putting it simply, a romantic vampire boy is a male love interest who is a vampire. He may not be the best love interest, as he'll most likely hunger for your blood or for others around you, and it's most likely going to be a Mayfly–December Romance, but on the other hand he's a rich and charming sex god.

Whether the relationship between a Romantic Vampire Boy and the heroine succeeds or fails depends largely on where the work stands on the Sliding Scale of Idealism Versus Cynicism. However, this also depends on the plausibility of the Romantic Vampire Boy as a love interest: if written poorly, he can be easily turned into a Satellite Love Interest and/or Relationship Sue.

This can overlap with Friendly Neighborhood Vampire, although not necessarily. Vampires who brainwash women into being his "brides" don't count as he has to be seen as a desirable Love Interest without the help of mind control. See also Vampire-Werewolf Love Triangle, Boy Meets Ghoul, and Lesbian Vampire; compare Seductive Mummy and Attractive Zombie.