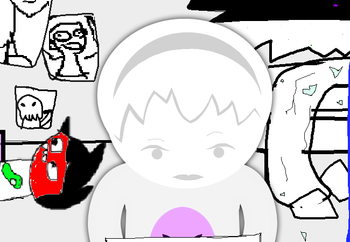 If you're wondering why she looks so fed up, she was just offered sex and a kidney.
"i'm just baffled by how good the shitty writing is behind this dumb piece of garbage. i wish my brain had the capacity for making this trash"
— RJ Lake, Homestuck musician
Advertisement:

is a fancomic that can be accurately described as Homestuck meets Dolan, written by someone under the screen name "o". It is a parody of Homestuck where everything, save for a few characters, is very crudely made, to the likes of Sweet Bro and Hella Jeff, whose characters are also featured in the comic. It began April 10, 2016, and soon became a cult classic among the fandom, particularly the Homestuck subreddit.

CANWC has become famous for not only its humor, but also the melding of in-character writing of the few sane characters with the ridiculously crude bulk of the cast, along with the existence of a serious plotline amidst silly nonsense. The comic has even spawned an ongoing series of music albums

made by an official music team. As with many Homestuck-inspired webcomics, it utilizes reader-submitted commands to advance the story. These commands can be submitted on the Omegaupdate Forums

, as well as a But I Voice Everything series

that covers a bit more of the comic by Rosw Lalondw

. In addition, there is also an o-approved game called the house swich places,

a Hiveswap parody created by the official music team.

you see tropes. theres probably some other things also: