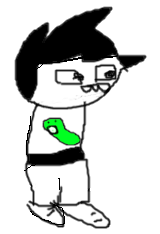 you're cooking skills are living up to you're fathers legacy

A farely aberage boy livving in sup urban Washigon with dad and its the birthday.

Yes. I mean Dabe. I will be forever haunted by the ignominy resulting from my recent insinuation that Dabe's name contains the letter V.
Hecka Jef: she doesnt care of any of us she just wants to take over everythnting and controle evretything to force it to be how she wntats it to be!!!

The Only Sane Man of the kids group. For whatever reason, recently she experienced an event she calls "the Corruption", which, in her view, completely ruined the universe, and therefore strives to make it "normal" again.

Known to others as Roze Lallonk.

it was hecka jef the hole time, hence the myserty

you're name is.. DABE STIDRER. you're interrests are... irony, and probaly other things too
Jaed

youre name is JAED HARDLY, you are a furry. you like sciense and garneding and other things that no one cares

Dadd
Momi
For tropes relating to Bg'ogubmom'ibulsprite, see her entry under Sprites

this guys names waynerd vagibong and he sense messages to jhon from the earth future, that is basicly all to matters about him
The Biig Man
See Other Humans
Spdaes Sleck
See Midight Crewd

Being stupid ain't gonna get you nowhere. That's what the Droll is for.
That joke is less funny when every person on the god damned planet acts like the Droll.

Known to others as Jagk Nore.