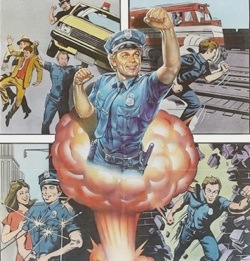 Meet the cop who can't be stopped.
— Super Cop
Advertisement:

One step up from the Cowboy Cop who enters Hot Pursuit with no regard for their own safety or anyone else's, here you have the police who have the equipment, the powers, or whatever else that puts them above and beyond the capabilities of the average police officer. This is common to the point where one of the Stock Superhero Day Jobs is police work, though they don't always do both at once.

Often takes the form of a Superhero who works for the police, a Cyborg, or a Humongous Mecha. A particularly Badass Normal can qualify if the criminals they chase are superpowered and they are not.

Overlaps with the Vampire Detective.

Not to be confused with Always Gets His Man, which is a freakishly perfect cop (though the tropes can obviously overlap). It also does not usually overlap with Police Psychic, which is when a psychic helps the actual cops out in some way, although there are examples of that trope who are actual members of law enforcement.

Compare and contrast this trope with Super Soldier and Military Superhero.

Critically injured in an attack by Criminal Syndicate Bioron, rookie detective Naoto Tamura was rebuilt as the cybernetic police officer Jiban to combat the Bioron threat.

Critically injured in an attack by Criminal Syndicate Bioron, rookie detective Naoto Tamura was rebuilt as the cybernetic police officer Jiban to combat the Bioron threat.