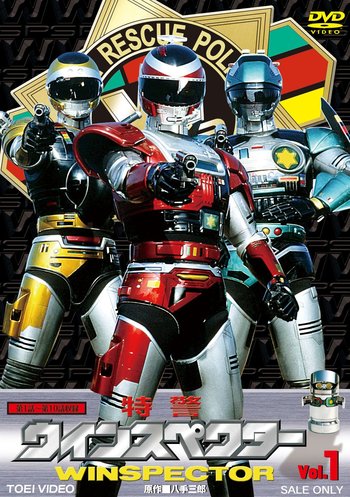 "Special Rescue Police Winspector": with a love of peace and faith in friendship, they fight crime head-on to protect the lives of innocent people. This is the "Metropolitan Police Special Emergency Unit"!

Tokkei Winspector ("Special Rescue Police Winspector") is the ninth entry in the Metal Heroes franchise, airing from 1990-1991. It was the first of its Rescue Heroes trilogy, followed by Tokkyuu Shirei Solbrain and Tokusou Exceedraft.

20 Minutes into the Future, the continuing advancement of technology has created new and dangerous ways for criminals to carry out their nefarious acts. Yet with this escalation comes a new generation of law enforcement: "Winspector", an elite rescue and anti-terrorism task force who use cutting-edge technology as a force for good.

The leading operative of Winspector is Ryoma Kagawa. Codenamed "Fire", he can equip the Crashtector Power Armor for a limited period of time to face any danger on equal footing. Alongside his two robot sidekicks, "Bikel" and "Walter", the trio fight to protect innocent lives from whatever threatens them. Uniquely for such a show, there is no central villain or Big Bad; rather, Winspector paces itself as an episodic serial.