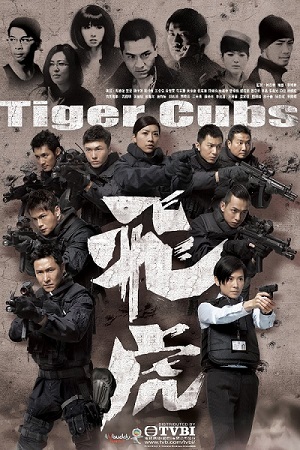 Tiger Cubs (飛虎, which literally means Flying Tigers in Chinese) is a Hong Kong TV series produced and created by TVB. A police procedural show that centers on the Hong Kong Police Force's elite anti-crime/terrorist unit called the Special Duties Unit (an alternative title given by TVB) alongside "The One", the title being rarely used in Hong Kong media), it first aired in 2012, with a second season in 2014.

In Cantonese, it's officially called Flying Tigersnote Justified since it's the colloquial nickname of the unit by the Hong Kong public or Special Duties Unit as well. The show centers on the SDU's officers and personnel as they are deployed throughout the SAR to battle against armed criminals and terrorists, as well as being called in to support their fellow officers when their expertise or manpower is needed when firearms are involved. The SDU frequently works alongside detectives of the HKPF's Organized Crime and Triad Bureau (OCTB) in most of their cases. It also shows the lives of these officers in and out of work as they try to balance their personal and professional lives, despite their position in the force.

The first season, with 13 episodes, has finished airing on TVB with good ratings and a DVD release in Hong Kong and in the United States. Actor Joe Ma sang the opening theme of the first season called 身邊的依據 or "Surrounding Basis". For the second season, he sang 血與汗 or "Blood and Sweat" as its opening theme.

A second season has already aired in Hong Kong with a total of 10 episodes. While the majority of the cast reprises their roles in the second season, lead actress Jessica Hsuan could not return for her role as OCTB Senior Inspector Chong Chuk-wah.

Outside of Hong Kong, the show has officially been broadcasted in TV stations in Australia, Malaysia, Singapore and in the United States. It's also known to be one of the most expensive dramas to ever be produced, with a total budget allocated by TVB at HKD$15 million, with HKD$1 million budgeted for each episode shot in Hong Kong.

The Hong Kong Police Force, like in all Hong Kong-produced movies and TV shows involving the force (except for those produced from overseas, like Christopher Nolan's The Dark Knight), has cooperated with TVB by providing the needed training and equipment in order to help the actors portray themselves in the show as actual SDU officers in the HKPF.