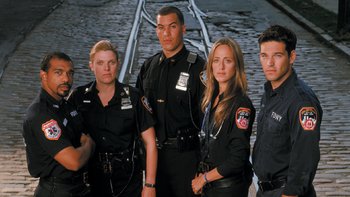 Third Watch was a series about the police officers, firefighters and paramedics of New York's Emergency Services, who worked the 3-11pm shift (the "third watch"). Focusing on the fictional 55th Precinct, the police station and fire house were just across the street from each other at "Camelot", on the corner of King and Arthur. The series dealt with both the personal and professional lives of the squads, and their relationships with each other.

As the series went on, storylines began concentrating more and more on the NYPD, and the FDNY characters were often forgotten. Most of the paramedics had left by the end of the 5th season, and the series itself ended after 6 years in 2005. Nevertheless Third Watch won critical acclaim for its realism and grit, and for the post-9/11 episodes which showed how the characters dealt with the tragedy.