Series / Three on a Match 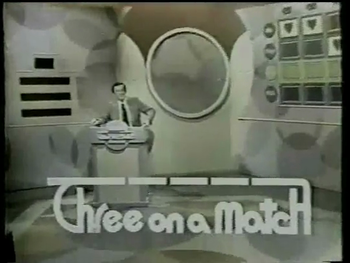 "It's Three on a Match, with your host, Bill Cullen!"
Advertisement:

Bob Stewart-produced Game Show hosted by Bill Cullen that ran from 1971-74 on NBC, in which three contestants attempted to answer true/false questions, in turn earning money which they could use to uncover boxes on a board and match them up.

To do so, each contestant secretly bid on how many questions they could answer (from 1-4) in one of three shown categories (the third would often be a grab bag category like "The Mixed Quiz" as opposed to a subject). The contestant with the highest number - or, if two contestants tied for the high number, the contestant with lowest bid - won the right to choose a category and play for $10 times the total number of questions bidded (1-2-3 would be worth $60, for example).

On April 23, 1973, the prizes were removed from the board and replaced with pictures relating to a certain "theme" (movie monsters, actors, animals, etc.). Further, the game was amended to keep three contestants on until one scored three matches (tracked by placards on each podium), which awarded a prize package worth about $5,000. While the trips were lavish enough and other prizes were definitely desirable, they were downplayed as gameplay and Cullen's affable hosting style were emphasized.

The format was changed once again two months prior to the end of the show in April 1974; instead of bidding and selecting categories of true/false questions, now Cullen read open-ended questions with the contestants buzzing in. The value began at $40 and increased by $10; if a player buzzed in and was incorrect, the value of the question would be split among the two opponents. Also thrown into the mix were "Takeaways" where the value of a right answer would be deducted from the opponents' scores.

Still, despite lasting far longer than any previous show had at the 1:30 PM slot vacated by Let's Make a Deal in December 1968, getting some affiliates to stop pre-empting the slot, and giving away much more with the format update, TOAM consistently ranked a solid third behind ABC's Deal and CBS' As the World Turns in the east (in the Pacific timezone, where it aired at Noon, against ABC's Password and local programming on CBS). Even so, neither its ratings nor its competition are what ultimately did the show in - see Screwed by the Network, under the Trivia tab.

Not to be confused with 1932 movie Three on a Match.