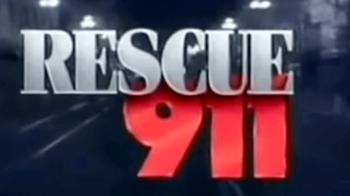 "This is 911, do you have an emergency?"
"This program contains true stories of rescues. All of the 911 calls you will hear are real. Whenever possible, the actual people involved have helped us reconstruct the events as they happened."
Advertisement:

Rescue 911 was a TV show that re-enacted true stories of people involved in emergency medical situations—it showed how the situation occurred, what happened, how other people helped, how emergency services got involved, and the aftermath of what happened. It was hosted by William Shatner.

The show aired on CBS from 1989 to 1996, and took its material from late 1980s and early 1990s cases. Each episode consisted of a few segments, each with its own reenactment of a true story interspersed with talking head interviews from the real life participants. Usually, segments begin with people going about their daily lives leading to some person(s) becoming involved in a situation that causes an emergency, followed by citizens' responses to it, leading to an emergency services (police/fire/medical) response, followed by (maybe) a few scenes from the hospital, and concluding with a "Where Are They Now?" Epilogue.

Most of these stories involved some sort of serious physical injury or other life-threatening situation, although the vast majority of stories (though not all!) show that these emergencies have survivors. And there are a few stories that don't involve any injuries at all but have various unusual situations.

When originally aired on CBS, episodes were typically an hour long, although segments could (and would) be trimmed to create half-hour or even quarter-hour episodes, depending on how much time the network needed to fill. A half-hour version later aired in syndication. Justice Network started airing the show in late 2017, and Pluto TV added a dedicated channel for it in 2020.

The show was influential in its time, with viewers learning from the show and applying that knowledge to their own emergency situations. This led to two specials called "100 Lives Saved" and "200 Lives Saved," which featured people who spoke of how the things they learned from the show helped them save other people's lives.

Not to be confused with 9-1-1, a police and rescue procedural drama.