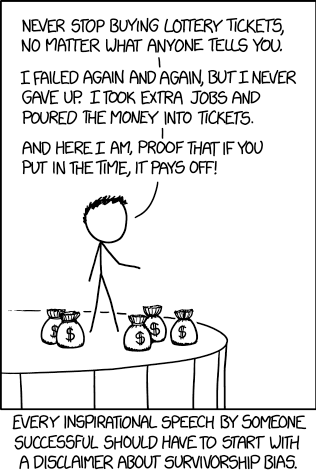 "The survivor bias was evident in the reception of Walter Isaacson's 2011 best-selling biography of Steve Jobs, as readers scrambled to understand what made the mercurial genius so successful. Want to be the next Steve Jobs and create the next Apple Computer? Drop out of college and start a business with your buddies in the garage of your parents' home. How many people have followed the Jobs model and failed? Who knows? No one writes books about them and their unsuccessful companies."
— Scientific American, "How the Survivor Bias Distorts Reality"
Advertisement:

is the tendency to address a problem or issue by focusing only on the people who survive, benefit, or escape from it.

This is an Omnipresent Trope, due to the nature of The Protagonist trope. Because a fictional story focuses on a single character (or a small group of characters), they are presented to the audience as being more "important" than the people the story doesn't focus on, and the audience comes to naturally see themselves in those characters.

Horror, Conspiracy Thrillers, Disaster Movies, Oscar Bait films and other genres with large victim counts or other forms of systemic oppression, use this trope more than any other. Suspense relies upon the audience accepting a real and imminent danger, but at the same time empathizing with someone still IN danger. For that reason, other victims (past or present) are given less importance than the survivors telling the story. While this is sometimes unavoidable (after all, if there's a killer on the loose, then some people are already dead, so there's no helping them now), the audience is often expected to still feel the most relieved when the Final Girl survives the ordeal, feel their greatest distress when The Hero Dies like everyone else, or cheer for a less-deserving team because Underdogs Never Lose.

An even more troublesome version comes from movies Based on a True Story. For example, if the overall story is about a terrible event like a disaster or plague, or an ongoing problem such as poverty or oppression, focusing only on people who survived or overcame the problem can lead to the audience impression that anyone could have done it if they had just tried a little harder. This bias often interacts with the Just World Fallacy (a Logical Fallacy that assumes good things happen to good people etc.) to create the implication that those who died were somehow morally inferior. This leads to various horror and slasher film tropes in which characters will presage their deaths by certain attitudes or actions, such as having an abrasive personality or having premarital sex.

Take care before listing "Aversions" or "Subversions". On the one hand, while any story where Everybody Dies seems like an aversion, it depends on several factors, like:

If the answer is yes, then they aren't an "aversion" or "subversion", because the story is still biased towards them over the other victims involved.

Sub-Trope to the Anthropic Principle — the idea that certain elements of a story have to be the way they are or there would be no story worth telling. Super-Trope to Protagonist-Centered Morality. Sister Trope to "Shaggy Dog" Story. Characters that understand the implications of this trope invoke Survivor Guilt. Because the bias is almost inevitable when The Protagonist trope is used, a Decoy Protagonist would be another way to play with this trope. Compare Dead to Begin With, where since they "survived" as an undead or something else, this trope is still played straight.

Tropes which rely on this often: