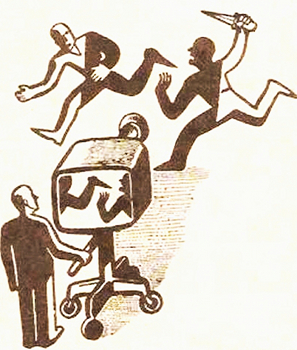 News programs love controversies. Documentaries (even educational ones) are more interesting when there's a fight or one-sided argument. And Reality TV shows thrive on conflict between the contestants. Theoretically, the conflicts are all the more gripping because they are real — no scripts, no second takes, and little editing. Everything that happened really happened, just as it's shown.

And if you believe that, I've got a bridge I'd like to sell you.

In point of fact, there are writers on reality TV shows, documentaries, and even the news. There can be "OK, can you say that again, only this time with more emotion". And there are certainly editors whose job it is to compress a long discussion into a few sentences. While the specific events may be outside of the producers' direct control (although that varies depending on the show — and don't count out less direct influences), editing often compresses hours, days, or weeks into mere minutes, and how the events are compressed can alter the meaning of a scene, twist a person's apparent attitude, and alter "reality" to the point that it's barely recognizable to those who were present for the actual events.

Some common forms of Manipulative Editing include: