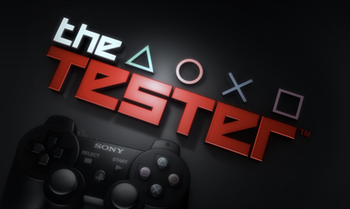 The first original live-action series distributed on a video game console, The Tester was a serialized reality program created by Sony Computer Entertainment and produced by 51 Minds. The Tester features eleven or twelve contestants, selected from thousands of applicants, competing in a variety of challenges to win a career at Sony Computer Entertainment as a game tester with a $5,000 signing bonus. The winner of the second season also received a PlayStation 3 video game console and a Sony BRAVIA 3D Television. In the third season, the prize includes a chance to work at Santa Monica Studio as a "Production Associate" on an as-yet unannounced Sony blockbuster as well as a Ford Focus. The series launched in North America on February 18, 2010 until its third and final season in April 3, 2012.

The program is available as a free download exclusively on the Play Station Network. Meredith Molinari is the host, guiding the contestants through military-style, physical challenges supposedly based on skills required of game testers, such as an eye for detail and effective communication. Each week, with the exception of the finale, at least one contestant is eliminated by a panel of three judges: release manager for Sony first-party quality assurance Brent Gocke, actor and comedian Hal Sparks (model Adrianne Curry in seasons 2 and 3), and a special guest judge. Eliminations are based on performance in the weekly challenges. For the finale, the three remaining contestants race each other in a final challenge with multiple chapters with the first contestant to complete all chapters crowned "the tester."