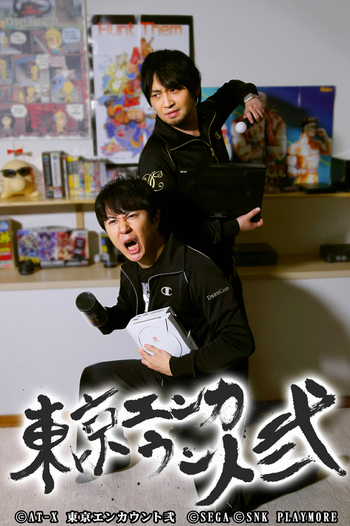 Tokyo Encounter (東京エンカウント), or Tokyo Encount, is a 30 min show that airs two times every three months on AT-X's night programming in Japan. It's about seiyuu Tomokazu Sugita and Yūichi Nakamura playing video games. Unlike Shinya Arino in GameCenter CX, Sugita and Nakamura don't have to finish the games they're playing, so they spend most of the time riffing them and playing them with some of their seiyuu friends and co-workers.

The show started in May 2010 and initially ended February 2013. However, a special episode called Die... Tokyo Encounter aired in January 2014 and the second season, Tokyo Encounter Nii, has been airing since May 2014. Nii has featured two Gaiden episodes as an extension to the normal episodes, one for episode 30, and one for episode 48, both of which were aired one month later. Both Gaiden episodes had a major segment that took the majority of those episodes' time, the first featured Tokyo Encounter Dai-Nenpyou ("Tokyo Encounter: Big Chronology"), and the second featured Watashi no Takaramono Encounter ("My Treasure Encounter"). In June 2020, during the COVID-19 crisis, the show aired two Clip Show specials featuring the highlights of the series up to this point.

While the show is hosted by Sugita and Nakamura, sometimes guest players will appear and play with them. All players aren't professional, but they enjoy playing video games privately. During the show, they always talk either about the games they are playing or about their job or private life, which gives the show a homely atmosphere. The guest players appear in two episodes that are aired in the same month. The games vary in all genres, platforms and age. Also, between the main games, Sugita and Nakamura play minigames with each other that are prepared by the studio staff, where they can win prizes and/or points.

For the list of the seiyuu featured in this series, see this sheet here.

The show is associated with following tropes: