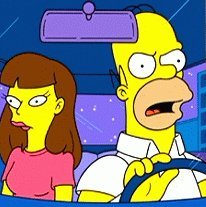 After stealing a rare gummi candy (one shaped like the Venus de Milo) from a confection convention, Homer loses it — and finds it on the butt of the babysitter he hired (a feminist university student) while driving her home, but his successful grab turns into a media circus and women's rights protest after Homer is accused of inappropriately grabbing the babysitter.