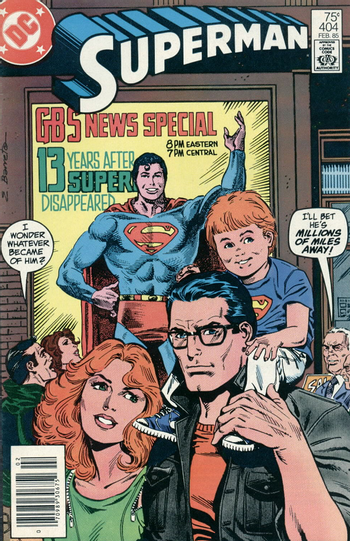 What happens after You Can't Go Home Again? For whatever reason, a character has been forced to leave behind their old life, and can't return. Rather than trying to get their old life back, some characters may choose to start a new life, possibly even with a new name.

How much they share about their old life depends on the character, and the circumstances in which they left home. If their new companions are not aware of who they used to be, this may serve as a Mysterious Past. Either way, no one from their old home knows what happened to them.

In order to be this trope, the character must intend their new identity to be permanent, or at least long-term, although how successful that is varies.

Even if they originally left home unwillingly, a character who has truly begun a new life may choose to stay even when given the opportunity to return. Of course, if they're the hero, this isn't as likely to work.

May involve Faking the Dead. Witness Protection is a government-funded version of this. A Retired Outlaw or The Atoner may do this to avoid past associations. Compare I Just Want to Be Normal and Heroic Fatigue. May overlap with Going Native.

As Sprig reads the letter Leif had left for Andrias, his voice is soon replaced with a voice-over of Leif while a montage of her new life as Lily Plantar is shown.

As Sprig reads the letter Leif had left for Andrias, his voice is soon replaced with a voice-over of Leif while a montage of her new life as Lily Plantar is shown.