Squirrels in My Pants 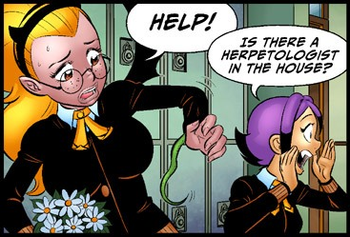 Rapper: Now somebody, anybody, everybody, scream!
Candace: [screams] There's squirrels in my pants!
Rapper: That girl's got some serious squirrels in her pants!
— Phineas and Ferb
Advertisement:

A character somehow ends up with one or more small live animals (or even tiny people) inside their clothing. Naturally, it will cause the character to go crazy over it, twisting, squirming, and grabbing to get whatever's in their clothes out. This trope often appears as ants in one's pants.

Occasionally, their movement and gyrations to get rid of it makes people think that they're dancing. Sometimes, the onlookers join in.

In the North of England, people do this on purpose

as performance art. No, we don't get this one either.

This trope is also commonly used in Fanfiction as a form of revenge or pranks against others, or in worst case scenarios, torture or fetish.

Compare to Accidental Tickle Torture, since some cases of this causes its victims to laugh. Compare Colossus Climb due to the similar nature of the trope. Also, expect some kind of Oh, Crap! reaction from the victim when they realize something's in their clothes.

Sometimes overlaps with Groin Attack if the said animal is harming or used to harm the person. If a small animal is entering a person's clothing for the purpose of killing the character, then you're looking at an Animal Assassin. note Though SIMP is not necessarily a prerequesite for that trope, they do sometimes overlap.

As mentioned above, this trope can overlap with Incredible Shrinking Man or Lilliputians if a tiny or shrunken person enters a normal-sized person's clothing. May be an example of Victoria's Secret Compartment or Marshmallow Hell if the animal/tiny person decides to use a woman's cleavage for this purpose.